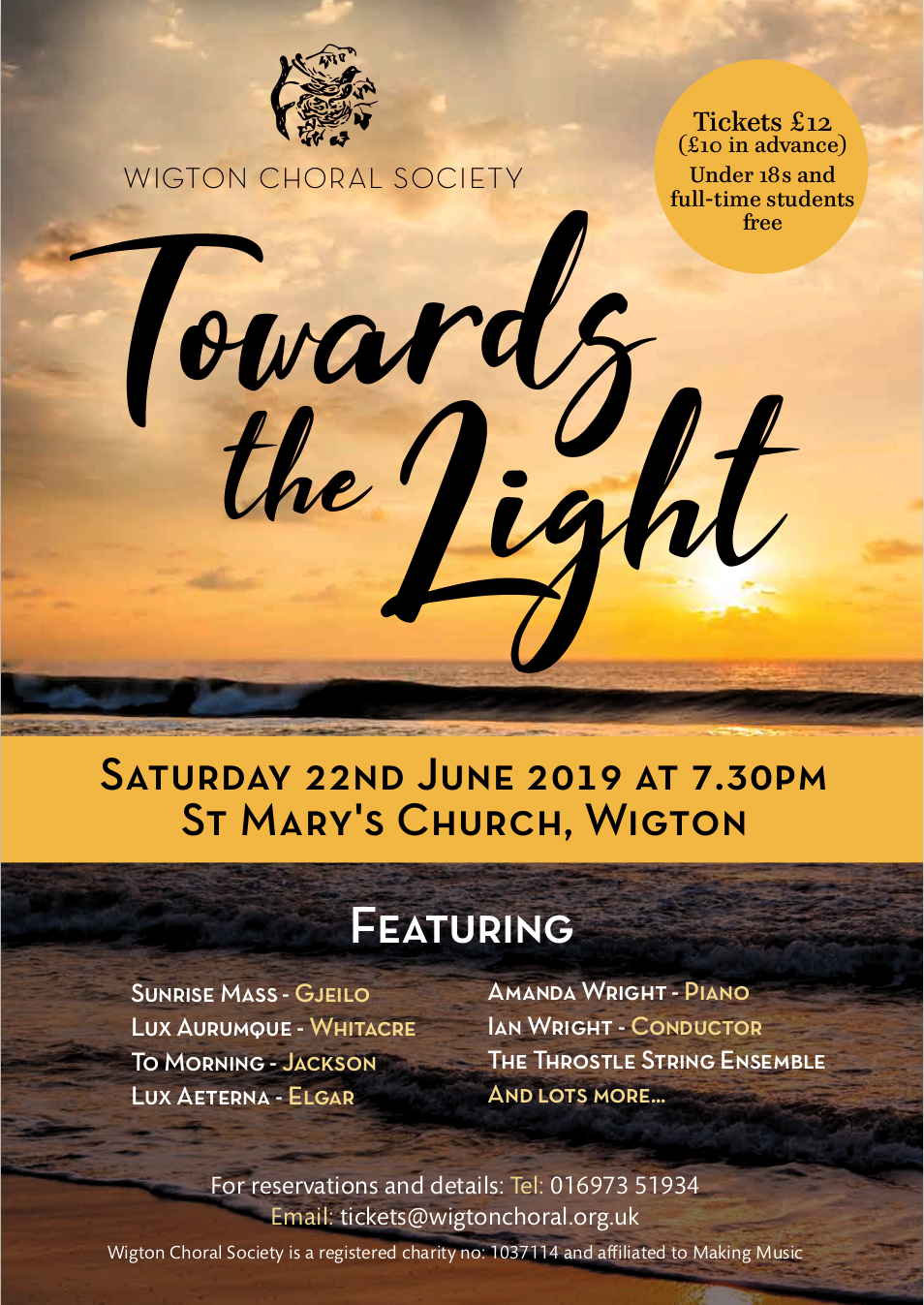 Last Saturday’s concert by Wigton Choral Society was imbued with the same magical midsummer light that filled the evening sky outside.

The choir of thirty singers gave a rousing start to the performance, confidently conveying the joy and hope of the unaccompanied opening piece, O Radiant Dawn, by James MacMillan.

Celebrating the role of light throughout the day, year, and our lives, the programme continued with a number of works dating from between 1871 and 2008, by composers as diverse as Elgar, Sullivan, Lauridsen, Gabriel Jackson and Ward Swingle.

The singers, though lower in number than usual, managed the multiple division of voices comfortably. In Whitacre’s Lux aurumque, Felicity Blamires and Stephanie Diver worked together seamlessly to produce the famously long final soprano note.

Ten young string players, all past or current students at RNCM Manchester, and the choir’s highly respected rehearsal accompanist Amanda Wright gave warm and reassuring support in some choral items, and the string ensemble shone in beautiful and tender renditions of works by Grieg and of Elgar’s Chanson de matin.

The shorter choral pieces very effectively paved the way for the final and most substantial work of the evening, by the youngest composer featured in the concert, Norwegian Ola Gjeilo. At over 30 minutes long, the Sunrise Mass is quite a challenge to set a small choir right at the end of a full concert, but the singers and ensemble combined beautifully, under Ian Wright’s clear and sympathetic direction, to give a highly expressive, energetic and moving performance. I particularly enjoyed the layered chords in the Kyrie and Sanctus, producing the most extraordinary impression of vastness despite the dry acoustic of St Mary’s; the hymn of praise in the Gloria dancing joyfully along; the same movement’s hushed, reverent Amens echoing the end of MacMillan’s antiphon; and the final Dona nobis pacem, with the solo violin rising gently above a rich and sustained chord from choir and ensemble, together enveloping the audience in warmth and delicacy.

Congratulations to Wigton Choral Society for a captivating concert! It is important to note that most of the works performed here were composed within the last 20 years: we are so fortunate in this area to be able to enjoy director Ian Wright’s careful and ambitious programming of new choral music alongside well established works.