The programme, consisting of pieces of reflection on the horror, waste and futility of war, was determined before the tragedy began to unfold in Ukraine. It now seems, sadly, to be a remarkably prescient choice. It was clear that many found the music immensely moving in this current time. 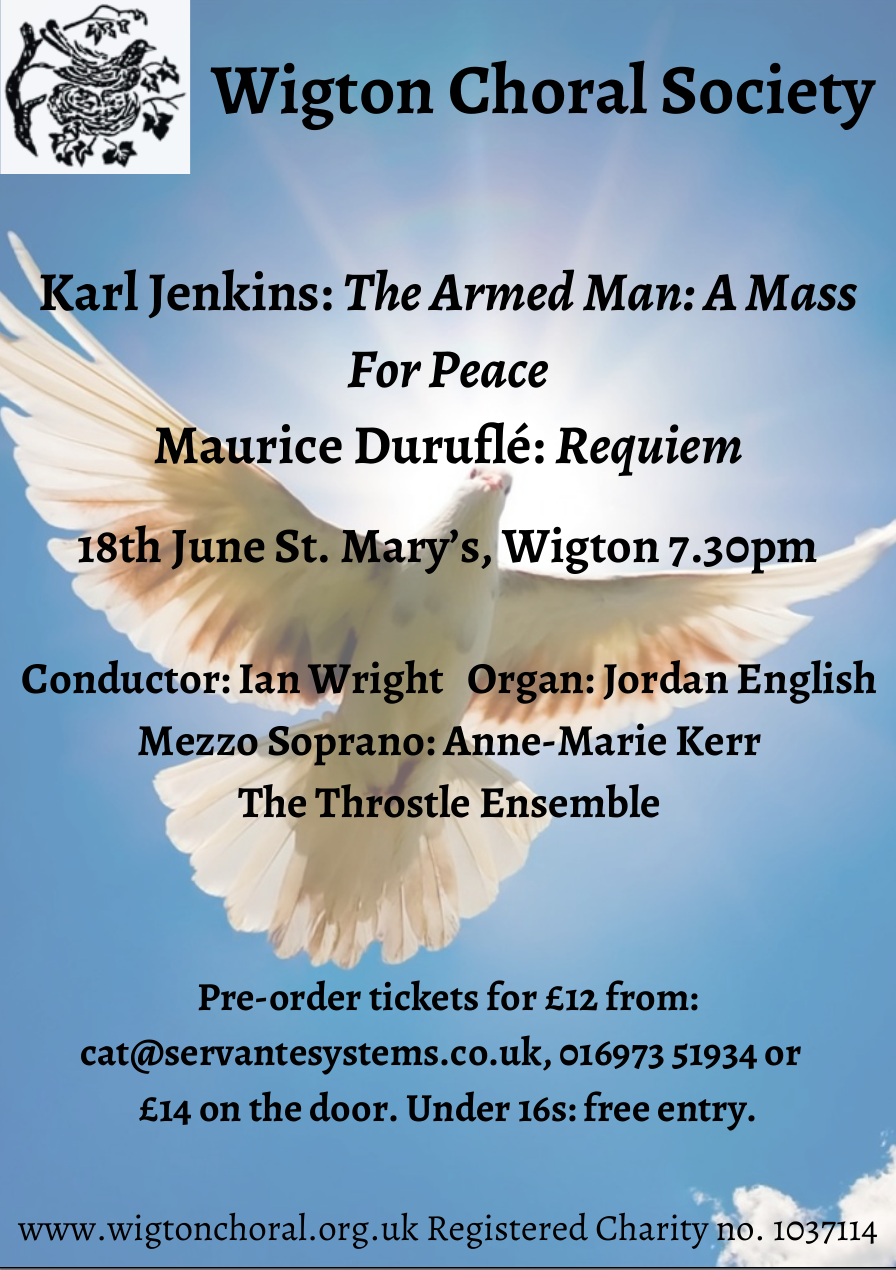 The Requiem was composed during and shortly after the Second World War and was, certainly in its early days, perceived as a response to that conflict. Duruflé himself dedicated it to the memory of his father, who had died in February 1945.

The Armed Man: A Mass for Peace was commissioned by the Royal Armouries at the end of what had been described as ‘the most war-torn and destructive century in human history’ and dedicated to the victims of the Kosovo conflict (1998-99).

Following a stirring rendition of the Ukrainian national anthem, the concert began with Duruflé’s Requiem. Highlights in this work included the Kyrie, in which the dynamic changes were handled extremely well, and also Anne-Marie Kerr’s solo performance of the Pie Jesu with sensitive organ accompaniment and a beautifully smooth cello solo.

The organ (with its relatively limited resources – especially for such a work as this Requiem) was managed superbly by Jordan English with the help of page turner and registrant Harry Brown. Throughout the concert the accompaniment from the Throstle Ensemble and the organ was just right - supporting the choir without overwhelming them.

So many choirs struggle to find enough male voices to give a sufficiently strong account of the tenor and bass parts in a work – but this is not the case in Ian Wright’s WCS: the strength and clarity of the male voices was very praiseworthy. This was especially evident in the Agnus Dei. It should be added that the sopranos and altos had many unison passages throughout the Requiem, including the Libera me, often in a relatively high range; their tone was consistently good, as was their diction.

Durufle’s final movement, In Paradisum, is perhaps one of the most difficult in the work. However, the chromatic harmonies (and, in places, somewhat awkward part-writing) were brought off with an enviable smoothness. The final three chords in particular (the last of which is marked tres long) had a gorgeous rich quality.

The Armed Man by Karl Jenkins saw the choir at their best. The bright central section of the Kyrie, ‘after Palestrina’, was confidently delivered with a real sense of Renaissance splendour. This was brought into sharp relief by the return of the opening ‘Kyrie eleison’ (cast in a dark D minor), in which the dynamics were closely observed.

The movement called Charge showed a good unity between the brass and organ at a fast tempo. The passage in which the choir is asked to ‘sing any notes and randomly gliss up and down’ conveyed all the requisite horror and, together with the 30-second silence and the ‘Last Post’, was very affecting.

In Now the guns have stopped Anne-Marie Kerr once again delivered a solo full of emotion, which segued neatly into the famous Benedictus. With sensitive accompaniment from the strings and organ, the cello soloist produced an excellent tone - with some hauntingly beautiful high notes.

The beginning of the final movement, Better is Peace, featured some good solo singing from four members of the choir, including a confident first entry in the tenor part. The later sections (‘Ring, ring’ etc.) were imbued with a real sense of hopeful anticipation; this effect was heightened by the superb top Gs and As from the sopranos. The brass delivered their part brilliantly, and the organist, upper strings and flute players deserve particular commendation for their execution of the rapid passagework in their parts. The louder passages were very impressive and confidently sung; WCS is certainly not one of those choirs that struggles (or never dares) to venture beyond mf.

The unaccompanied ending of this movement (‘God shall wipe away all tears’) has rightly been described as ‘stunning’. In this performance the parts were beautifully clear and balanced; the awesome meaning of the words (from Revelation) was, I am sure, felt by all who heard them.

Our own national anthem brought this exceptional concert to a close.

We support the humanitarian activities in Ukraine and other affected areas. A retiring collection at the concert was in aid of this effort.

We also recognise the ordeal of those refugees who have had to leave their country. We were pleased to a welcome a number of refugees from the war in Ukraine, who have found a home in this area, to this evening concert.